TechsPlace | On a primary level, Office 365(or Exchange Online) is a subscription plan that comprises MS Office programs and other services. It has plans for the home users as well as business. Moreover, O365 for business includes Skype, Exchange Online and lots more. On the other hand, On-premise Exchange server exclusively runs on the Windows Server Operating system. The organization can manage their email services either in on-premise or Office 365. But, sometimes organization feels to move Office 365 mailbox from cloud to In-house Exchange servers. Because On-premise offers great flexibility to interconnect with other local networks. Moreover, the user has the power to decide how the data will be stored in the hardware and so on. After considering the need to migrate from Office 365 to Exchange On-premise, in this article, we will cover the most suitable method to move mailbox from O365 to On-premise Exchange 2016, 2013, 2010, 2007 environment.

How to Move Mailbox from Office 365 to On-Premise Exchange

Office 365 data items cannot be directly transferred in On-premise Exchange Server 2016/ 13/ 10 and below versions. At first, the Exchange Online mailbox data get moved to Outlook supported PST file format. After that, migrate the PST file to On-premise Exchange environment. Typically, those two ways to migrate MS O365 mailbox to on-premise

Software to Backup Office 365 Mailbox to PST is designed to take backup of the entire mailbox of Office 365 into PST or EML file format. This is one of the easiest and cheapest ways to move the data items form O365 to Outlook PST file. A user only needs to install the tool in the system. Once the software is configured successfully, follow the steps sequentially that are mentioned below:

Step1: To move Office 365 Mailbox to On-premises Exchange. Run the Software on your local machine. Provide the Office 365 Account credentials as it is shown in the in the screenshot. 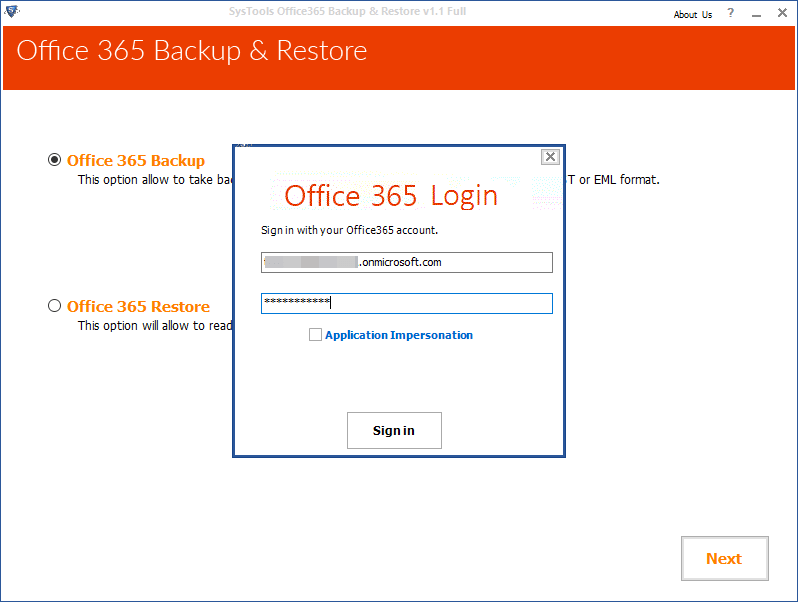 Step2: The software offers two option i.e. Office 365 Backup & Office 365 Restore. In this case, select the Office 365 backup option and click on Next. 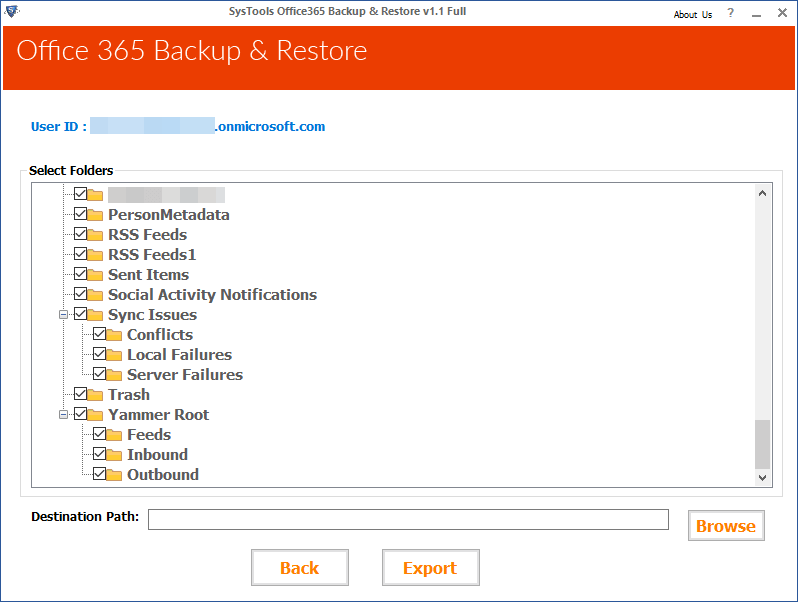 Step4: Now, Browse the destination path to save the PST file that will be created after exporting to PST file format. Now, Click on Export button.

Step5: Here, users can select the File Format and apply Date Filter. So, only the specific data lie between the range will be downloaded. Then, click on Start button to start the backup process. 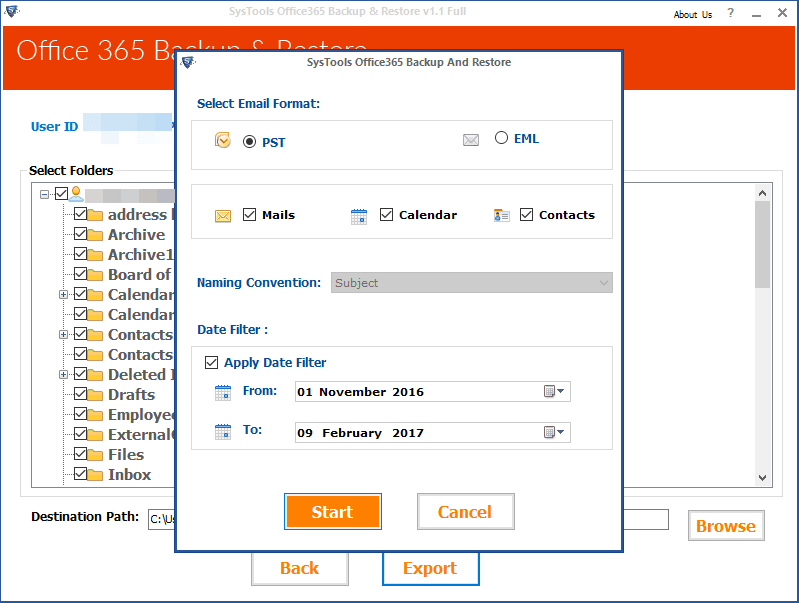 Step6: After the completion of process, software display a message that the backup process is completed.

Step7: Go to the selected location for the backup file and view the O365 backup (.pst) file.

Once the Exchange online data transfers to PST format, then manually use the PowerShell command and move the Office 365 mailbox to On-premise Exchange Server 2016/ 13/ 10/ 07 Mailbox . One can also use eDiscovery Tool to export PST from Office 365 Mailbox. The direct method requires eDiscovery to search out all data stored in the mailbox of Office 365. After that, move the data files into Outlook supported PST file format. But one can face several issues while using eDiscovery.

Once the PST file downloaded on the system, then open PowerShell Exchange shell on the Exchange server to move Office 365 PST file to Exchange Server. To do this check below steps:

Step1: Only the universal naming convention path is used by New-MailboxImportRequest to import the PST file. So, mention the path where the downloaded files stored. Run this command:

Step2: Moving PST to On-premises Exchange Server will take sometime to complete. Besides this, users can see a status of the process in an Exchange Administrative Center.

Exchange server is licensed for both i.e. On-premises software and cloud application. Hence, in this article, we have discussed the manual plus automated approach to move mailbox from Office 365 to On-premise Exchange 2016, 2013, 2010, 2007 environment. Step by step solution make the task easy. If user don’t want to use SysTools Office 365 Backup Software to export PST from Exchange Online can use eDiscovery manual approach. After PST file is created can easily be migrated to Exchange Server.