TechsPlace | Nowadays, more and more online businesses are getting dependent on mobile applications than websites to generate revenue. And the reason behind it is most obvious because with each passing day, the numbers of mobile users are increasing rapidly and people are finding it more convenient to make a purchase using their mobile phones. That is the reason why app developers are getting more and more in demand when compared to web developers. Nowadays, the difference between both is the hottest topic to discuss. Let us now understand the difference between web development and mobile development by considering a few major aspects of both.

Have a look at today’s scenario of web developer vs app developer!!! 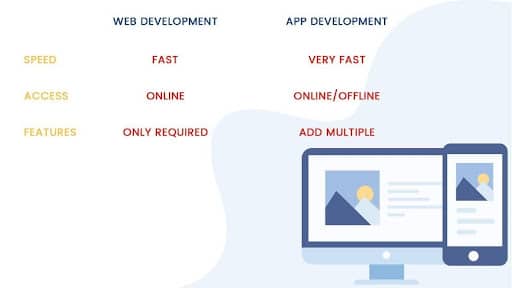 Though there is no secret in it that tech-related skills are highly in demand in the market. As the numbers of mobile users are increasing with each passing day so more and more businesses want to get business mobile applications therefore mobile app developers are huge in demand.

Mobile applications are smarter than that of website developers

The nature of mobile applications provides a lot of advantages to the customers. That is the reason why customers are getting attracted to mobile applications. As people have mobile devices almost 24 hours a day just like the clothes they wear. Apart from that, there are a lot of features that a mobile application has such as speed and direction, location, calendar/schedule, and so on. It provides more convenience to users.

Difference between rankings and ratings

When it comes to website design, one prepares a design to rank the website higher so the website can be visible to visitors while in the case of mobile applications, ratings play an important role. It is the responsibility of the developers to generate great rankings and ratings for websites and applications to make a business highly successful.

Mobile applications are widely used by customers to make purchases as they find it convenient and an efficient option to buy using a handheld device instead of opening their computer or laptop to do this. This is the reason why mobile application developers are higher in demand. Here it should not be considered that web developers are not in demand. Because we all are surfing the internet over the desktop as well not just to get information but as well as to place an order for an item, therefore, the need for web developers is not going to end. So, in the end, we can say that for both web developers and application developers, there are unending good career opportunities for both.

The difference in page size to application size

In the world of the internet, whether you are generating a mobile application for your business or a website, the focus of the developers is to create an optimized mobile app or website. In the world web, the focus is on optimizing or reducing the size of the pages of the website while in the application, the concern is on the entire application size. This is because of the load uptime of a website or application. The smaller the size, the faster it will load and the better experience you can provide to your customer.

Compatibility by the browser to computability by device

A website should be compatible with the browsers that are widely used in the area or region where is your target audience. In the same way, if your target audience is using Android or IOS then you should generate an application according to the platform you want to run the application. This becomes an issue because there are a lot of devices present out there in the market so you have to first do an analysis of the market and then make a decision on which platform you want to run your business application.

A web developer can use his/her knowledge in application development

If you are a web developer then you can use your knowledge regarding different languages such as Java, CSS, etc in application development as well.

Manoj Babal is a seasoned content writer, digital marketer and SEO expert, with years of experience in the field of marketing. He is an SEO analyst at Axis Web Art and loves every second of it. He is passionate about helping people in all aspects of online marketing flow in the industry. Also helping business with search and content marketing.